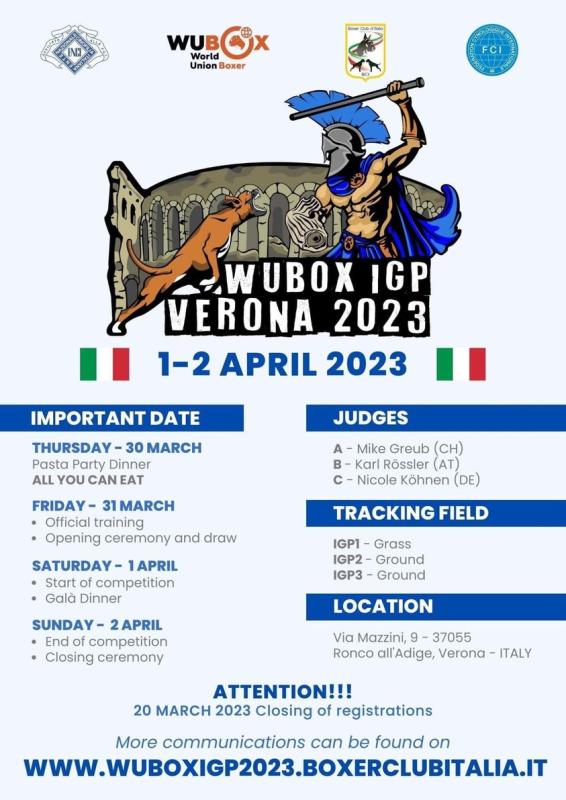 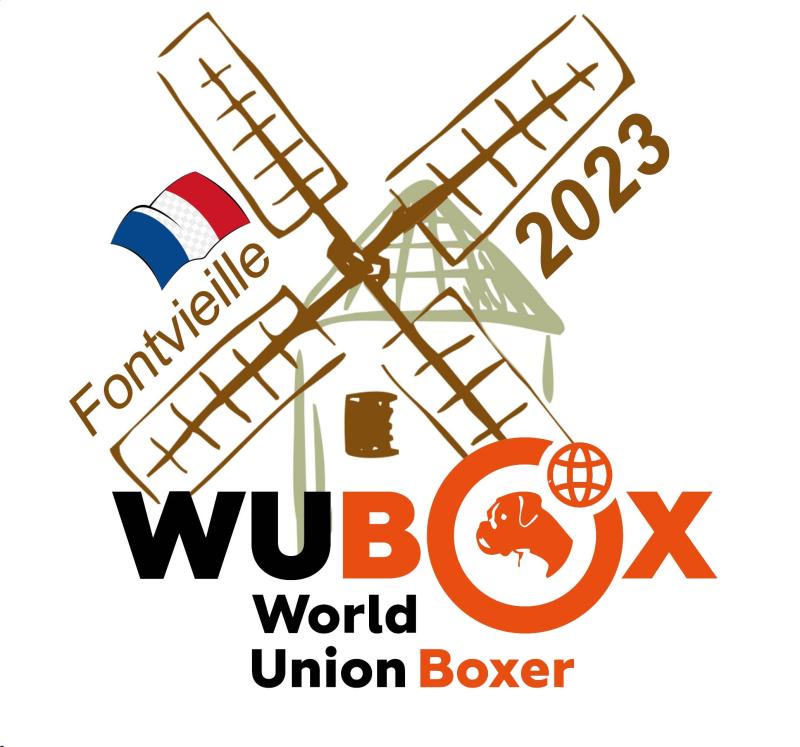 I live in France. I worked for Royal Canin until the end of last year and I spend a lot of time for the French Boxer Club too and now Wubox.

I have done my first Boxer litter more than 30 years ago now (Belemnite kennel), despite I am not that old!!!

Since that time, I never stop breeding, looking for bloodlines, going to shows all over the world to understand the Boxer.

I like the Boxer powerful but very elegant, with that so important Boxer expression on his face. The body should be strong with perfect angulations to have a beautiful movement.

I still breed today but my wife does most of the work (thank you Sophie !) because I devote myself more in judging. I judge until 2009, 6 to 8 times per year minimum.

I have been judging in France (two times the championship) of course, but also in Spain (Championship and Cacib), Czech Republic, Latvia, England, USA, Finland, Norway, Denmark….

I think it is very interesting to judge in different countries and see different way of breeding boxers and meet so different and interesting people.

Born in Pontevedra, May 15, 1975I had my first boxer when I was thirteen, I started with a brindle female who had many character but balanced. Thanks to her, I acquired my first knowledge not only in the breed but in the dog in general. I got my first litter in 1992 when I was 17 and the second litter in 1994. That’s where I got it began my first experiences as a spectator in dog shows in Galicia and Portugal. In 1997, I acquired a female who became the base of mom breeding, Alanis de Vagalume, daughter of Ch. Neòn V. Hause Rehberg and Voska dels Segadors. In January 1998, I obtained my affix “de las Gárgolas” from the Real Sociedad Canina of Spain.

Breeder of the breed with much requirement by studying it with much seriousness and with clear ideas, I became a fan of selective breeding. In my case, it remained familial because I have never done more than one litter a year trying to choose the best options of the blood currents present without necessarily going to fetch the stallions fashion. My goal was to be as sincere as possible with race. This allowed me to do with dogs from my cattery such as CH. J Club BCE, Conrado de las Gárgolas, followed by the Champion of Spain and young of the club BCE Ingrid de las Gárgolas then later CH.J. Júpiter and Jóga de la Gárgololas or direct descendants, with whom I was able to make many national and international championships.

Ring commissioner from the age of 17 in my native Galicia and nationally. In 2000, I passed the exam of exhibition ring curator. In 2006, I also did 3 times ring Commissioner in the organization of ZTP á Orense. In 2006, I conducted a course of upgrade to make ring curator in all exhibitions. In 2007, I got presented to the national competition judge examination of the Real Sociedad Canina of Spain, where I have passed the 8 necessary competitions to stand for the examination of national judge of the race boxer, which I did in 2011. In 2013, I was appointed an international judge and I obtained also extensions for judging Doberman and Sharpei. The Boxer Club of Spain appointed me as a race judge in 2019. Since 2000, I have been able to organize many regionals in Galicia, events of socializing, and classes on the boxer race.

Spokesperson of the Société Canine de Galega and member of the Boxer Club of Spain as Secretary in 2007 for 8 years, during which I had the honour of organizing many national breeding and pride to be in the organization of the Atibox of Santa Perpetua de Mogoda (Barcelona) in 2009 where we broke the participation record with the presence of more than 850 boxers.

Always attentive to the evolution of the breed both in Spain and abroad in participating in many boxing events, both as an exhibitor or spectators, such as Italian championship, Europasieger, Portuguese championship and Atibox. Boxer judge in various countries, Italy, France, Czech Republic, Spain…

In 2018, I judged my first championship of the Boxer Club of Spain, celebrated in Yuncos (TOLEDE) which grants the first obligatory point to obtain the title of champion spanish.

I am currently a member of the Commission of the Real Sociedad Canina of Spain where I am responsible for the organization of all competitions and exhibitions at CAC in the national territory.

My experience with boxer starts in 1992 and my first litter is in 1993. I breed since 2000 with the name “del Quinto Canto” and in the following years I made many Italian, club and international Champions.

I also have experience in working with boxer, having trained and conducted many dogs, always from my kennel, also in world Championships and I’ve been Italy Team Leader in 2019, 2020 and 2021 World Championships.

I have judged in many national, international and special shows of FCI, ENCI and BCI, in Italy and other countries, including Italian annual BCI Boxer Championships and Atibox World Boxer Show in Malmoe.

I am “trainer judge” since 2015 and so I have the honour to be one of the experts who prepare the new Italian judges. 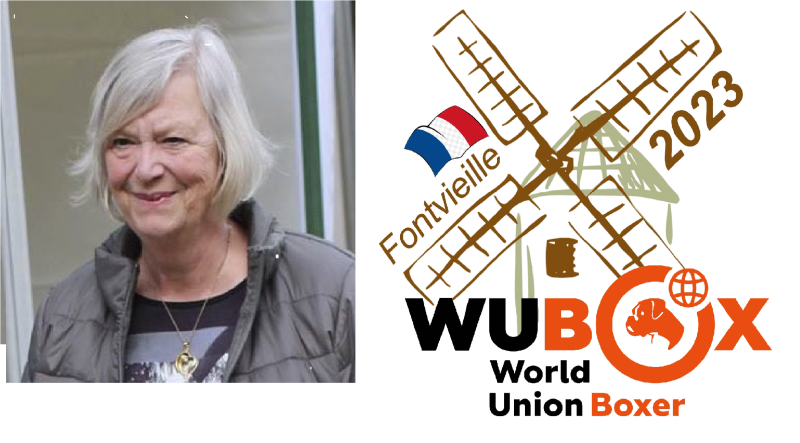 Each week you can find on this page, the presentation of one of the 4 judges of the next WUBOX World Show 2023. We will be glad if you share info about this event to boxer friends.

Herewith a bit of my “Boxer-life”.

I have been FCI Judge since 1991 and breeding since 1983 under the kennel name Troica and have throughout the ages owned several top dogs.

This has been incredibly instructive and exciting to Judge boxer from all over Europe.

Among the places I have been judging include big shows in Switzerland, France, Romania and , several Annual Winner Shows – among them the Jahressieger in Germany (as first foreign judge), Portugal, Belgium, the Netherlands, Austria, Latvia. And of course several special club shows throughout the Nordic region, and Czech Republic, England, Italy, and the USA BOX Sieger Show in Nashville, TE.

I am looking forward and very proud to be judging this WUBOX Show 2023 in France. 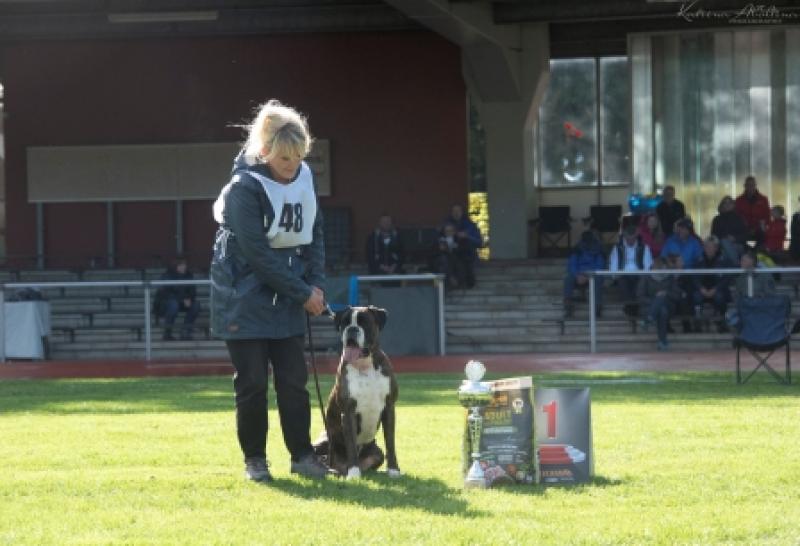 Added PDF file with all dogs descriprions and results - you can download this file.

If you have more photos for our galery - please contact us! 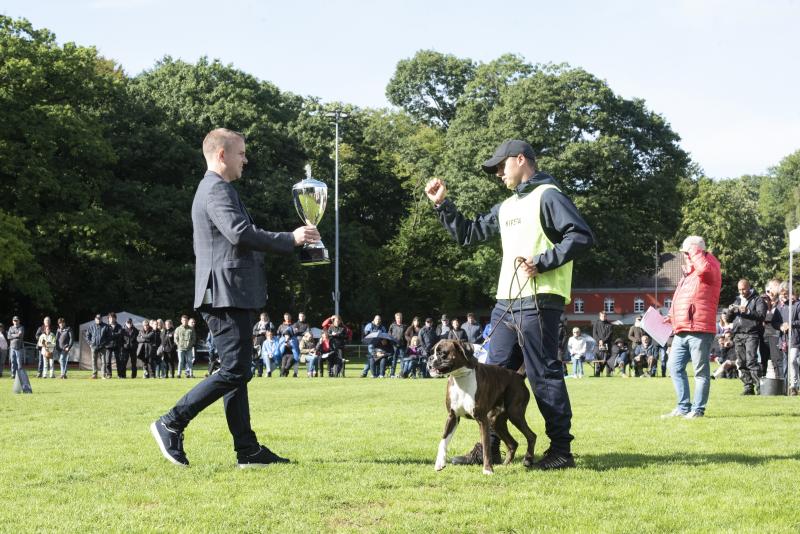 More information you can find in EVENTS - WUBOX SHOW - RESULTS of the shows.  Updating in process!

We are looking forward to 338 registered Boxer for the 2nd WUBOX Show in Aachen's Waldstadion and
to an international Boxer festival with friends from near an far!
We hope to meet you in Aachen on 17./18.09.2022!

The registration portal is open! We looking forward to see you!
Link for registration: https://boxerklub.safecloud.solutions/.../onlinemeldung...
General information: http://www.boxer-klub-herzogenrath.de/.../jsa---wubox.html
If you have any questions, don't hesitate to contact the local organizer: jsawubox22@gmail.com

On 6th - 8th May 2022 the 2nd WUBOX IGP took place in Tápiószentmárton (Hungary). Many thanks to the Magyar Boxer Club for the organization of this event. Dr. Roland Csöke and his team did a great job.

All results of the 2nd WUBOX IGP 2022: pdf download
Congratulations to the winners and all participants.

This year, the WUBOX Show 2022 will take place in conjunction with the annual winner show of the BK Germany
BK Herzogenrath (LG Rheinland) is organizer of this special event. Show area will be the Waldstadion Aachen.
As an exception, the BK annual winner will take place on Friday, September 16th, 2022 and the WUBOX Show 2022 on September 17th and 18th, 2022.
More information, especially the judges, will follow soon.

WUBOX IGP Championship will take place in Tápiószentmárton (Hungary) on May, 6-8, 2022.
More information

With effect from January 1st, 2022, the Finnish Boxer Club is also a member of WUBOX. We welcome the Finnish boxer friends and look forward to a successful cooperation.

Due to the pleasingly high number of registrations, the event has to start on Thursday, November 11th, 2021. Please note the new program.

Great news:
42 boxers from 9 nations are registered for the WUBOX IFH Championship in Gresten (Austria): 26 x IFH2 / 11 x IFH1 / 6 x IFH-V
We look forward to the championship and the teams. On the occasion of the WUBOX general meeting in Italy on September 10th, 2021, the KLNB (Slovenian Boxer Club) was accepted as a member of the WUBOX. We look forward to cooperation.

Due to the pandemic, the dogs had no opportunity to take exams for a long time. Therefore, the age restriction in competition 1 (IFH-V) will be lifted once for this championship:

Information about the event
see more

A total of 27 teams registered
Paricipiants

You can find Information about the WUBOX IGP International Championship here: igp.wuboxer.com

We had to change the location for the WUBOX IGP International Championship on August 20-22, 2021. It cannot take place in Göttingen. Instead, BK Frankenberg will organize this event  in 09669 Frankenberg (Sachsen).

We are taking the pandemic into account. Many handlers had no opportunity to start an exam in the last 16 months. We want to enable these handlers to participate as well.

We had hoped that the COVID-19 pandemic would calm down enough for the WUBOX show to take place in June 2021. Although the incidences are falling, it is unfortunately not yet possible, to stage an international show. We have to be happy, if cynological life is at least nationally awakened.
But we will do everything, to ensure, that the WUBOX show takes place in 2021. The Italian boxer friends will meet soon, to fix an alternative date. They will do their best to organize the WUBOX Show 2021 in autumn.

Thursday 25 Febuary 2021 We have added a show calendar

There you will find the annual winner shows in our member countries.
See more

2.
The International WUBOX Show, planned for 30.04. - 02.05.2021, will be postponed to June for the time being. Should the circumstances make an international show impossible in June, an alternative date should be fixed in autumn 2021. Italy remains the organizer. The location is still to be determined.

3.
We assume and hope, that the WUBOX IFH Championship can take place as planned from November 12-14, 2021 in Austria (Gresten).

We will inform you here immediately, if there is any news!

Stay healthy and we hope, we can meet us soon!